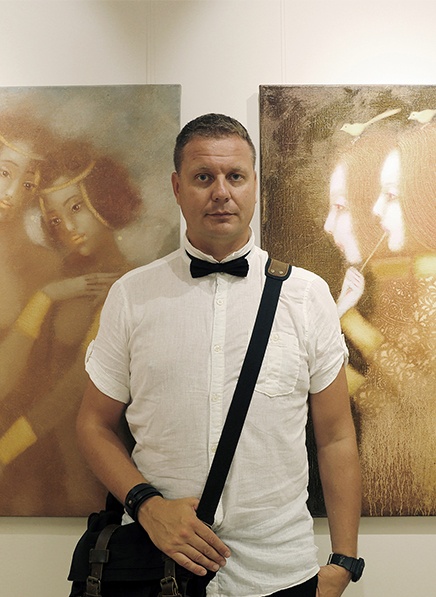 
Eduard Zentsik is a prolific Estonian-based artist of many faces. He’s developed radically different artistic personas, refusing to link his name to a single signature style, technique, or theme.
Instead, Zentsik mixes genres and media and playfully subverts the traditions of old.

Zentsik’s oeuvre is as enormous as it’s diverse. Some of his endeavors, like the mildly macabre art brut series, focus on physical metamorphoses and flourishes of the flesh.
Others, like the highly symbolic paintings made in the surrealistic canon, accentuate the spiritual aspects of his philosophy. Elsewhere, the artist indulges in formless Pollockian color
drippings or flirts with digital media.
Zentsik’s paintings contain an open-ended space, a distinctly magical reality where entities, artifacts, and concepts from seemingly arbitrary eras and cultures serve their enigmatic purpose.
No mythology or esoteric teaching is immune to the artist’s tactful manipulations - Zen in Zentsik goes hand in hand with Tao, Krishna, Christ, and the Twelve Olympians.

This is not an intellectual game, though. Those willing to unlock the code are likely (and welcome) to reveal metaphysical depths. Some may find his work pretentious,
but Zentsik is not afraid to use self-aware decorative strategies and deceptively simple tropes to convey big ideas. Behind the images, there is a powerful coherent cosmology
explaining the underlying natural order, the ulterior essence of everything. This is true spiritual art with a transcendental message, ostensibly co-created and inhabited
by the spirit of the Creation itself (all artworks have always existed, you know).
Zentsik’s mission, therefore, is to cut open two-way windows between our world and the fantastical realm through which mystical figures and phenomena on the other side meet our gaze.
Aren’t these the proverbial Platonic ideas represented on canvas in vaguely familiar forms?

Painter, photographer, graphic artist, designer, author of installations, performances and musical improvisations.
Organizer of youth exhibitions and projects. For over years of creativity had more than a hundred personal exhibitions and took part in numerous joint projects.
Participant and winner of international Photographic and Art competitions. Numerous works are in private collections around the world.